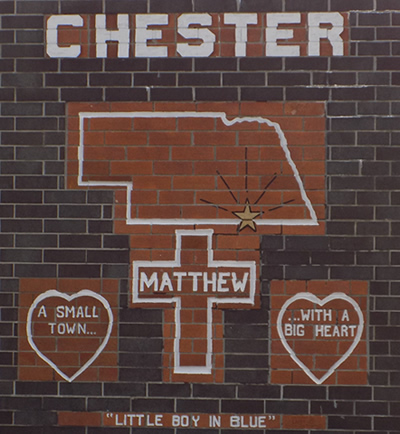 Because of a tragic incident on Christmas Eve 1985, the whole nation became aware of a village in Nebraska by the name of “Chester”.  On that cold, night, the body of a child, dressed only in blue pajamas, was found along the roadside.  In the months that followed, authorities searched for clues that would lead them to learn his identity and to discover the circumstances that surrounded his death.

In the early spring, while the name of the little boy was still unknown, he was laid to rest in the Chester cemetery.  The concerned community of Chester turned out en masse to give him a dignified funeral, calling him “Matthew, gift of God.”  Years later, when the entire sad story was revealed, his real name, Daniel Stutzman, was added to the stone.  He will, perhaps, always be known as “Chester’s Little Boy Blue.”